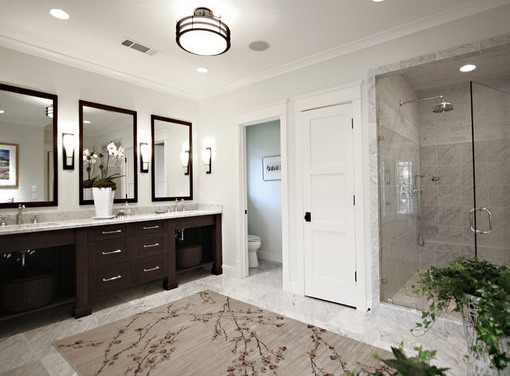 Forget the extravagant bling of the 1980s and monochromatic spa look of more recent years. Home owners desire a more affordable, personal style, along with water and energy conservation.

Master bathrooms, along with the average home’s overall footprint, grew larger in recent decades. And with more square footage came excessive luxury and expense—tubs with aromatherapy kits, exotic countertop materials, coffee makers, small refrigerators, and showers for two with an arsenal of body sprays that performed like a human-sized car wash.

But changes are afoot. As homes have decreased in size, many people prefer to put any extra space into other areas of the house, such as closets, says Stephanie Pierce, senior manager of the design studio at MasterBrand Cabinets. They also don’t always see the need for more than one tub in the house, and often there’s already one located in bathrooms designated for children or guests.

What’s out: For now, these trends have bitten the dust for many home owners, according to Chicago designer Tom Segal:

Arrays of shower jets and sprays 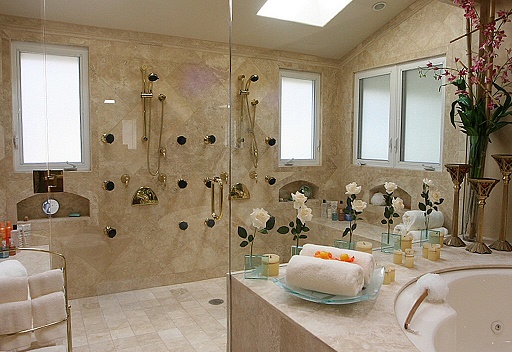 Concern about getting money that’s been invested in a remodel back at resale is another driving force spurring home owners to spend less on master bathrooms. It’s tough to justify significant expenditures when buyers seem to attach greater value to adding a deck or replacing a garage or entry door, according to the 2015 “Cost vs. Value” report. Bathrooms remodeled with upscale finishes and fixtures, for example, cost around $54,115 this past year and returned only an estimated 60 percent of that in the sales price. Less costly midrange redos brought back a better return of 70 percent, according to the same survey.

Yet, having a personalized, functional master bathroom with a touch of luxury remains a buyer priority. “People aren’t going to the extreme they once did, but they want a room that looks fresh,” says Sarah Barnard, a designer in Santa Monica, Calif.

Rather than relying on trends from the hotel industry as has been popular in years past, Elissa Morgante of Morgante-Wilson Architects in Chicago says, home owners are more likely to use their own needs as inspiration. Case in point: Nikki Wheeler resisted a designer friend’s advice when remodeling her master bathroom in her 1890s Denver home.

The jury’s still out on bath tech

The amount of technology home owners want in their bathrooms depends, in part, on where they live. In designer Claudia Juestel’s San Francisco base, home owners want cabinets with outlets and a section that can keep medicine refrigerated, TVs concealed in mirror fronts, showers with digital controls, and lighting personalized wirelessly through apps such as HUE. Chicago designer Tom Segal says some of his clients love these bells and whistles, but others don’t want to deal with computerized controls in showers or self-cleaning, heated toilets with seats that automatically rise as they are approached.

“She was pushing me to knock down walls to create a magnificent oasis. I thought with an older, more historic home, creating these giant hotel-style bathrooms didn’t fit,” she says. Wheeler kept within the existing footprint, adding a vaulted ceiling and upgrading the shower, countertop, cabinets, and floor.

Making these types of changes can make a big difference when selling, says sales associate Paul Wyman of The Wyman Group in Kokomo, Ind. An outdated bathroom requires a lot of work, and most buyers will favor a house with a redone bathroom over an unfinished one, he says.

Today’s understated master bathrooms are influenced by the following eight style categories. Encourage your buyers and sellers to pick and choose which upgrades or which categories to focus on to come up with their own personalized take on this trend:

Aesthetic. In recent years, spas inspired the emergence of tranquil, often monochromatic bathrooms. But many home owners found the look too spare and didn’t want to feel like they lived in a hotel, says designer Tiffany LeBlanc, whose eponymous firm is based outside Boston. “People want a look that’s more authentic and personalized, with their favorite colors and materials,” she says. The preference now, Barnard says, is to eschew classical or historic styling, even in traditional homes and for older clients. Chicago designer Tom Segal of Kaufman-Segal Design says he’s seeing industrial or rustic elements being introduced in these contemporary designs, via wood-grain accents, large pendant lights, and other smaller touches.

Fixtures. Showers have gotten smaller and the number of jets and sprays that once seemed de rigueur has been dialed down. “Nobody wants to feel they’re being attacked. It became a sensory overload,” LeBlanc says. Instead, more designers equip showers with a single, often oversized head in the ceiling and a handheld sprayer attached to a wall. If a tub is included, it’s most often a simple rectangular design and not a whirlpool, though freestanding oval tubs are newly popular thanks to their sculptural look. Wall-hung toilets are growing in popularity due to the ease of cleaning. Another popular selection is “comfort height” models, which sit an inch or two higher to make it easier to sit down and get up, says Lauren Schreyer, a designer and broker with Related Realty in Chicago. When it comes to sinks, rectangular shapes are preferred. Segal says if home owners are concerned about resale and have the space, a dual-basin vanity is the safest choice for the master bath.

Cabinetry. White matte paint, glossy lacquer, and pale oak remain popular finishes for the master bath, says Morgante. More cabinets are being fitted with drawers rather than doors to make accessing contents easier, which follows the trend in kitchens, says Pierce, who adds that cabinet fronts are also less embellished than they have been. Bucking the overall less-is-more trend, medicine cabinets have gotten larger and deeper to help compensate for the disappearance of the bathroom closet. Segal likes medicine cabinets to be a minimum of 4 inches deep, with as much as 8 inches if space permits.

Faucets. Though chrome and nickel still appeal to many, rose gold, bronze, oil-rubbed bronze, and brushed gold are the trending faucet finishes to consider. Because of conservation concerns, many manufacturers are engineering products that pare the flow but don’t change the bathing experience for users, says Tim Burdett, marketing manager of Pfister Faucets, which is reacting to new water regulations in its home state of California.

Walls, floors, and countertops. Subway tiles remain a classic choice for walls, but they’re getting bigger than the traditional 3- by 6-inch size, which also requires less grout, says Morgante. The materials are increasingly made from natural stones rather than glass, metal, or other high-gloss finishes, Barnard says. Floors are also being laid with larger-format tiles, often highly durable porcelain that can mimic marble and wood but sometimes real reclaimed boards that are sealed to withstand moisture, says Chicago designer Mikel Welch. Granite is disappearing from countertops, as it has in kitchens, and is being replaced with marble, natural quartzite, and manmade quartz, all of which also stand up well to water, Segal says. However, he warns clients that nail polish remover can etch these surfaces.

Color palettes and textures. White remains the favorite palette, but color experts like Jackie Jordan, director of color marketing for Sherwin-Williams Co., cites a trend toward a less stark option with a pink-beige or gray cast, as well as warm taupe. Pierce also sees an increase in tone-on-tone brushed effects, distressed wood with visible grains, or layering of colors to add dimension. When picking paint, Jordan advises splurging on high-quality options that can resist stains, mold, and mildew, such as her company’s Emerald line. Some designers like Barnard find clients still enjoy having a favorite saturated color like a pumpkin orange or canary yellow on an accent wall. For a similar reason, wallpapers have returned in textured vinyls and grass cloths that withstand water and humidity. Welch suggests handmade Turkish oushak rugs, rather than just bath mats, as another way to introduce texture.

Lighting. Decorative housings are still popular and help to reflect personal style, says Claudia Juestel of Adeeni Design Group in San Francisco. But instead of glitzy chandeliers, choices now include subtle but interesting pendants and sconces, both fitted with LED bulbs to save energy and dimmers to span the wide variety of needs from morning to night.

Affordable extras. Splurging on items that are used every day can both be a smart staging strategy and a good way to ensure home owners will continue to enjoy a remodel until it’s time to sell. Bringing in luxury in a value-added way was the thinking behind entrepreneur Scott Tannen’s newly launched company, Boll & Branch, which offers organic, fair-trade cotton bath towels in five neutral hues. “People want value but will pay a bit more so they don’t have to replace these kind of items every year,” he says.